HOW TO GET THE MOST OF YOUR ALPHA-STIM

If you have any additional questions, please call us at 800-684-9343 or send us an email at [email protected] . Remember, your Alpha-Stim device comes with FREE technical support. We will be happy to talk with you. Yours in health, Allevia Health Support Team.

With the recent publicity about the dangerous side effects of many prescription medications, patients are more concerned than ever about the risks they take when they seek help for their pain or mood disorders. Alpha-Stim® technology is not only safer than any drug, but it is even safer than most other devices because it only uses microamperes (µA; millionths of an ampere) of electricity. To put this into perspective, a device producing a maximum output of 600 µA, like the Alpha-Stim®, uses about 1,000 times less current than a typical TENS device, and is limited to about 11,000 times less power than a 60-watt light bulb. Some people don’t even feel this amount of electricity (Kirsch 2002).

Treats anxiety, insomnia, depression and pain.
Alpha-Stim generates a unique, patented waveform that no other device can replicate.

The waveform is analogous to the precise chemical compound that differentiates one drug from another. Alpha-Stim's waveform is distinctive in its proven safety and efficacy.

How does the Alpha-Stim® work?

The Alpha-Stim® is based on the concept that the biophysics underlying the body’s biochemistry also plays a significant role in regulating all of life’s processes. There are about 75 trillion cells in a human body, each having a small electrical potential of ~80mV across its cell membrane, similar to a battery. Alpha-Stim®’s proprietary waveform works by moving electrons through the body and brain at a variety of frequencies, collectively known as harmonic resonance. This normalizes the electrical activity of the nervous system and brain as measured by an electroencephalogram (EEG).

What scientific research has been conducted?

The efficacy and safety of Alpha-Stim® is backed by more than 60 research studies. Most of the studies were double-blind placebo controlled and were conducted at major US universities. At present, there are over 126 research studies on CES in humans and 29 experimental animal studies. The overwhelming majority of the scientific research is extremely positive. No significant lasting side effects have been reported. View the results of CES and MET studies conducted specifically with the Alpha-Stim® technology here.

What about clinical results?

Post-marketing surveys show that more than 90% of pain patients achieve clinically significant relief with Alpha-Stim®, even when conventional intervention has failed. In a survey of 47 physicians reporting on 500 patients, Alpha-Stim® treatments produced clinically significant results (at least 25% improvement) in 92% of patients for pain management, 94% for anxiety, 90% for depression, 93% for stress, 79% for insomnia, 90% for headaches, and 95% for muscle tension. Nearly half of the patients in all categories had 75 to 100% relief. Read more.

The exact mechanism by which Alpha-Stim® produces its effects is not fully understood. However, based on previous and ongoing studies, it appears that the Alpha-Stim® microcurrent waveform activates particular groups of nerve cells located at the brainstem, a site at the base of the brain that sits atop of the spinal cord. These nerve cells produce the chemicals serotonin and acetylcholine, which can affect the chemical activity of nerve cells that are both nearby and at more distant sites in the nervous system.

Alpha-Stim's proven results are due to its patented technology and protocols. Just as every 5mg white pill is not the same, Alpha-Stim's unique waveform produces results vastly different from its competitors. None provide as much proof of safety and efficacy as Alpha-Stim.

Alpha-Stim waveform uses microcurrents (millionths of an ampere) delivered in a precise configuration via earclip electrodes which direct the current to the brain. The waveform is specifically designed to increase alpha brainwaves.

Alpha-Stim microcurrent stimulation (MET) appears to affect cellular physiology and produce its effects by reducing the electrical resistance of the injured tissue and restoring its cellular capacitance. MET is a highly effective modality in the treatment of pain problems. 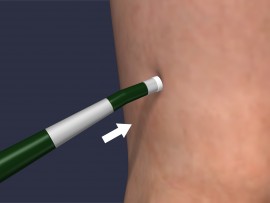